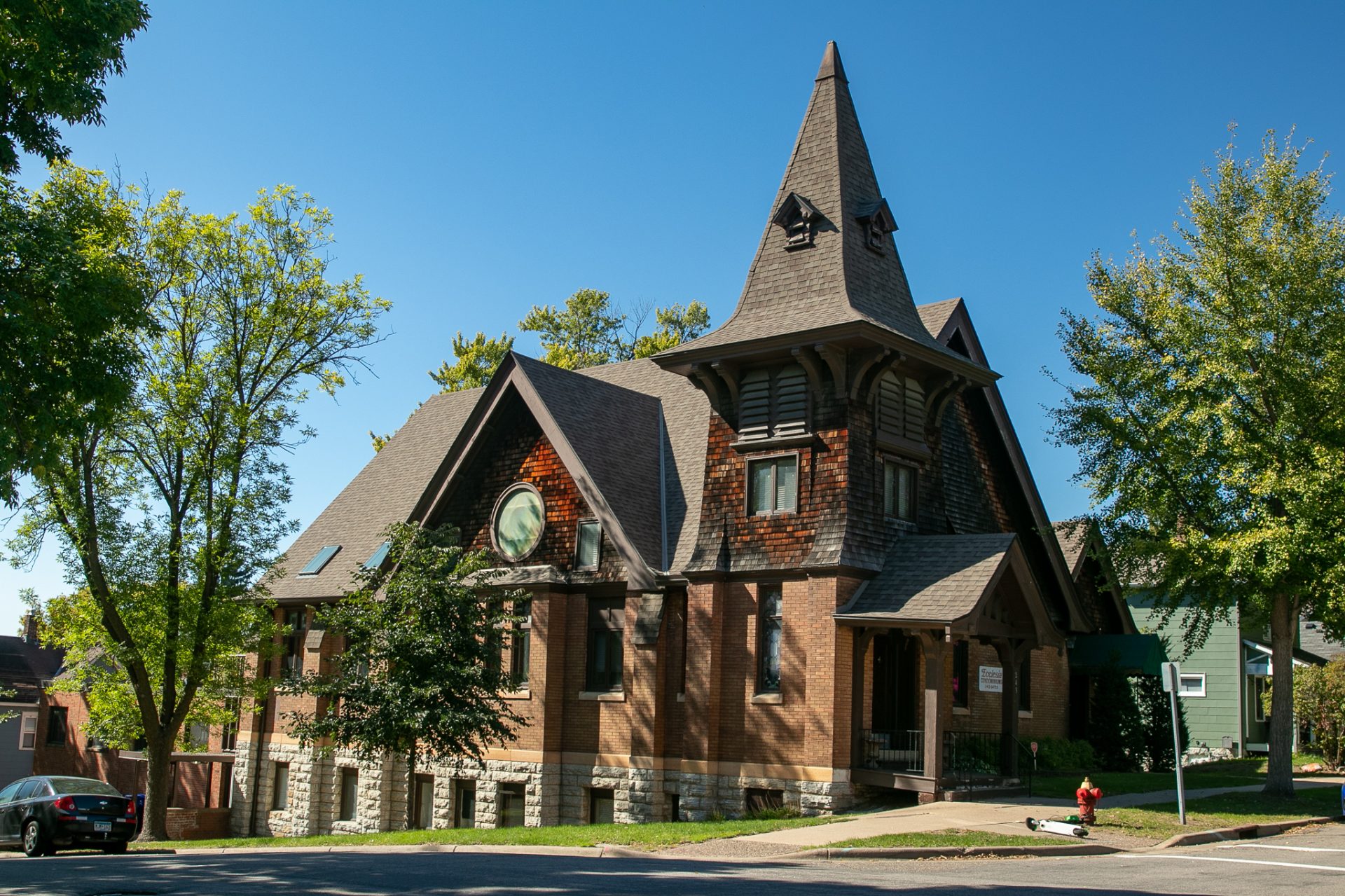 The small house movement caught on in the late 1990s. It’s easy to understand, with the dramatic rise in housing prices. Even so, there’s been a steady surge in home size with the average U.S. home growing from 2,521 square feet in 2007 to about 2,600 in 2015. In reality, smaller, simpler homes have been built for many years. The house at 1243 Highland is a nice example. Built in 1911, this home has a mere 640 square foot of living space. As you can see, small doesn’t limit creativity.

I’ve passed this unusual and tiny home at 1160 St. Clair dozens of times on my bike and in the car and have always wondered about it. The exterior has undergone major changes, most recently encased in corrugated metal.

Over the years of biking I’d even stopped to knock on the door, hoping to talk to someone, but without success. As I rode by today, I noticed a pickup in the driveway and knew this was my opportunity to finally uncover the story of this small, unconventional structure.

When I met Todd Fink It was obvious he was heavy into renovating the property. He was wearing a paint-stained t-shirt with the sleeves cut off and blue jean cutoffs smudged with dirt. Todd explained that he and his wife bought 1160 St. Clair out of foreclosure on January 2, 2015. “Since then,” Todd said, “we’ve put six months into cleaning up the inside and fixing it up and finally turning to the outside and starting some of the solar and re-siding and landscaping.”

By trade, Todd is in the solar energy business. He owns 45 North Solar, a company that designs and installs solar electric and thermal systems. In renovating the house, Todd put those skills to work and honed his carpentry and landscaping know-how. I asked Todd about the condition of the house when he purchased it and without hesitation, he answered, “Unhealthy,” and laughed heartily.

“I want to be able to heat this thing with a cat.”  Todd Fink on the energy efficiency of the house

Based upon the condition, Todd knew he’d need to gut the interior. “I was able to find a place with practically nothing to save and that enabled me to go pretty deep in my remodel. And that’s a really good reason to resolve the energy issues that exist in all these old houses. A lot of these houses that don’t get a remodel are going to be energy irrelevant.

“I want to be able to heat this thing with a cat. The solar air collection will help but we want to put in some hydronic heating in the floor to make the heating a little more mellow and comfortable.”

Winter is the off-season for the solar industry so Todd kept his employees busy working on the St. Clair residence. The Earth-friendly efforts extend outside the home, starting with the roof-mounted solar panels. “The PV (photovoltaic) system is anticipated to take care of the whole house load. At 540 square feet there are a limited number of places to use electricity.”

According to Todd, “We’re thinking of using the triangular lot as well as we can to permaculture. We’ve got great exposure on the southwest side, so building terraces and continuing some of the gardening we’ve started here is going to happening.” Todd continued, “It’s a 3000 square foot lot. It’s about as small as they get in the Twin Cities but it does have an amazing amount of space that can only be used to garden.” They’ll likely plant fruit trees or vegetable beds along the nine foot setback in front of the railroad tracks.

Todd’s research of 1160 St. Clair and uncovered some unexpected history. The structure was built in 1927 as a store at a cost of $700. “When it was a store front, as far as I can tell, it was divided into three 10 foot rooms on an 18 foot wide building. So there was a front area, there was a workshop and probably a storage room in back.”

He also learned the building had no plumbing until 1947, which is when Todd speculates it was converted to a residence.

Todd’s biggest concern was over the smallest room. “We’re just trying to fit a kitchen in as small an area as possible and when it all fleshes out with furniture we’ll see if it’s enough room.”

Todd noted that I was one of many visitors, “On St. Clair we get a lot of walkers. I wish I had a nickel for every time somebody said, ‘I’ve always been fascinated by this place.’ That one sentence has come out close to a dozen times now.”

From small on St. Clair to stately on Summit — 1006 Summit — the Governor’s Mansion. The house, 20 rooms and 14,700 square feet, was built for lawyer and lumber executive Horace Hills Irvine and his wife Clotilde. The brick and stone home was completed in 1912 for about $50,000. The Irvines spent another $7,000 acquiring the one and a-half acre property on which their mansion was built.

The Tudor-related design uses very little wood on the exterior, which is ironic in that Horace Irvine’s primary business was lumber.

The Irvine House stayed in the family until August 1965, when Clotilde and Horace’s two youngest daughters, Clotilde Irvine Moles and Olivia Irvine Dodge, donated it to the State of Minnesota in honor of their parents. Later that year the legislature authorized using the home as the governor’s residence.

One consequential update to the home is security enhancements.

I spent a solid 20 minutes walking back and forth past the mansion, taking pictures, and peering through the wrought iron fence. I am sure the security detail was following my wanderings and I’m a bit surprised nobody questioned me.

There is much more to learn the colorful history and preservation of the Governor’s Mansion. Two of the best sites are the official Governor’s Mansion website at http://mn.gov/admin/governors-residence/history-preservation/history/index.jsp and The 1006 Summit Avenue Society, the non-profit organization dedicated to preserving the Minnesota Governor’s Residence at http://www.1006society.org/.

If you want to do more than read about the mansion, it opens occasionally for public tours. Contact residence.gov@state.mn.us for information.

A couple of blocks east of the Governor’s Mansion is a disjointed series of interconnected buildings that make up Mitchell Hamline School of Law. (The law school was called William Mitchell School of Law from 1956 until the end of 2015, when a merger with Hamline University’s law school was approved.)

The buildings that make up the law school were built over 60-some years for distinct and disparate functions.

The original occupant was the First Methodist Episcopal Church. The cornerstone of the building was laid in October 1907 and the Church moved in the next year. A highlight of the First M.E. Church‘s 850 seat auditorium was the organ built for $7,600 by the Austin Organ Company of Connecticut, according to information from the Minnesota Annual Conference United Methodist Church.

The First M.E. Church moved out in 1959 and sometime around 1964 Saints Volodymer and Olga Ukranian Orthodox Church moved in. Grace Community Church was the last religious congregation to own the building. In 2007, 100 years after the construction began, Steppingstone Theatre moved in.

The Academy, as it’s known today, is a meticulously restored building at 25 North Dale Street which now holds offices. The former St. Paul Academy School for boys is the site of a first for one of Saint Paul’s most famous natives. According to the book “Critical Companion to F. Scott Fitzgerald: A Literary Reference to His Life And Work” by Mary Jo Tate, in 1909 a 13 year old F. Scott Fitzgerald got his first byline with the short story “The Mystery of the Raymond Mortgage,” which he wrote for the school newspaper, “St. Paul Academy Now and Then.”

Apparently, Scotty was not a favorite of at least one fellow student. “Critical Companion to F. Scott Fitzgerald” by Mary Jo Tate says the school newspaper published a note penned by student Sam Kennedy that said, “If anybody can poison Scotty or stop his mouth in some way, the school at large and myself will be obliged.” One hundred years ago this was likely considered humorous or at least sarcastic. But if written today, no doubt Sam Kennedy would get at least a suspension and possibly, have criminal charges filed against him.

In need of more space, Saint Paul Academy left 25 North Dale for a larger, modern building at 1712 Randolph Avenue in 1931.

On Summit Hill near The University Club is narrow street which resembles an alley. Summit Lane, for all practical purposes, is an alley – garages, driveways and backyards line the street and there is not a front door to be seen along its four block run. One block of Summit Lane retains what is probably its original brick pavement.

Back up the 77 steps to the top of the Lawton Steps and I doubled back on Lawton Street for a block to Summit Court. After about a block, seemingly in the middle of the street, sat a large brick and stone building.

The Burbank-Livingston-Griggs House has such a extensive and extraordinary history it is worthy of an entire book. The mansion was designed and built for wealthy stagecoach owner James C. Burbank. Burbank’s other ventures included partnering with notable early Saint Paulites J.L. Merriam and Amherst H. Wilder in a wholesale grocery business and working as a forwarding agent (logistics in today’s jargon) for the Hudson Bay Company, according to “St. Paul’s Historic Summit Avenue” by Ernest R. Sandeen.

Construction on the 8,000 square foot home began in 1862 and took three years to complete. The mansion is universally considered by historians and architects to be among the preeminent early Saint Paul homes.

Modern amenities built into the home included steam heating, hot and cold running water and gas lighting, all rarities in the early 1860s. The exterior is grey Mendota limestone, with an interior lining of brick and an air chamber between, ostensibly to make the home rat and frost-proof.

The Burbank-Livingston-Griggs House changed hands several times over the years. In the late 1880s, Crawford Livingston purchased 432 Summit Avenue. Livingston and wife Mary had a daughter, also named Mary, who in 1915, married Theodore Wright Griggs, ultimately providing the other two names attached to the mansion.

The creativity, function and design are intertwined, no matter what the size of the house. Today’s encounters with houses of vastly different size and purpose made me realize that. The creativity Todd Fink put into making his small house not just functional, but comfortable, is as great an accomplishment as that of the architect and builders of the Burbank-Livingston-Griggs House and Saint Paul’s other great mansions.

Click here to review the map of this ride.