Back to the industrial area north of University Avenue and west of Transfer Road to hit a couple of streets I haven’t crossed off my list. First photo-op: White Castle District headquarters on Vandalia Street. 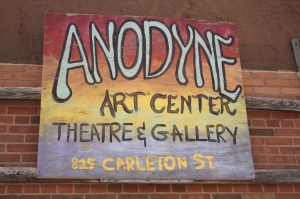 Nobody with an open door can escape a visit from me and my audio recorder. Today I popped in on the Anodyne Art Center, 825 Carleton Street, and met Mary Pendergast, Co-Founder and Executive Director. Anodyne (a derivative of the Greek word for healing and soothing) opened in 2001 to support artists with disabilities which include traumatic brain injury, mental illness, Multiple Sclerosis and developmental disabilities.

At any one time Anodyne’s eight staff members support 50 to 60 “associate artists” who are referred there by social service case managers and family. Arts offered include sculpting, pottery, painting, drawing, oils and pastels and performance art such as music recording, theater and dance. “We look at the community building more so in our commonalities versus our differences.” Those commonalities, says Mary, are art.

Mary adds that Anodyne is about fostering creativity, discovery and ‘development of process’, not producing professional artists, “We really, really like to support each other in understanding is that the arts are never going to make a million dollars. You may not make 10 a year but you need to maybe diversify with another job.”

Anodyne’s facilities are extensive with separate painting and ceramics studios, a place for writers and a theater for performance artists.

Financial support for Anodyne comes primarily from state and federal funds and grants. Funding cuts over the past several years have put a strain on the budget forcing the Art Center to consider reducing its space.

Mary told me, “One of the things we’ve always felt is this is an environment that the associate artists have, this is their space; we’re the stewards. We get to facilitate what they want to do and if we were to close due to not being able to afford something I wouldn’t be able to stand it.”

You can learn more about, volunteer at or donate to Anodyne Art Center at http://www.anodyneart.org.

Most notably, it was the 2002 campaign headquarters for Senator Paul Wellstone. The sidewalk in front of the building became an impromptu memorial in late October 2002 after Senator Wellstone, his wife Sheila, daughter Marcia and three campaign workers were tragically killed in a plane crash in northern Minnesota .

This former fire station at 926 Hampden Avenue was built in 1895 and has been a private home for more than 30 years. It’s also the heart of a present day love story.

Colin Cureton and Ceci Martin met for the first time about two years ago on a bike ride to Minnehaha Falls. She got Colin’s phone number but lost her phone and Colin’s number before ever calling.

Fast forward to this spring-Colin is living in the fire house and Ceci lives nearby with a roommate who is a Post-doctoral candidate at the U of M. According to Ceci, “We were waiting at the bus stop in front of the co-op and he mentioned he had a spot open in his apartment and I said, ‘Oh that could be good for the post-doc.’”  So, said Ceci, they chatted about it on the bus to the U.

Ceci came over every day around dinner time for a week hoping to get Colin’s phone number, supposedly to give to the post-doc. One day she found Colin at home and he invited her in. Colin picked up the story from there. “We started talking, the stars aligned but it was over a conversation over the house that kind of brought us together.”

As it turned out, Ceci, not her roommate, moved in with Colin. The final chapter of the firehouse love story is yet to be written but here’s hoping it closely follows a fairy tale and ends happily ever after.

There is another storyline involving the former Saint Paul Fire Department Station 13. It was the last station in Saint Paul converted from horse-drawn rigs to motorized fire engines in 1924. Station 13 was decommissioned in 1978, according to the Extra Alarm Association of the Twin Cities website.

Colin told me that the person who lives in the lower level of the former firehouse purchased it from the City for less than $20,000 and turned it into a duplex. The homeowner added a two car garage and above it, a three season porch.

The way the story goes, when Station 13 was decommissioned, the fire department removed the fire pole.

According to Colin, “When they (the would-be homeowner) bought the house they requested the pole be brought back because they thought that would be really cool and the fire department said, ‘No way, we don’t do that.  Sorry we can’t help you.’ But one day, apparently, a fire truck rolled up and they just carried a fire pole out and dropped it off no questions asked. “ So the fire pole has resided there ever since, although, as you can tell from the photo it’s not useable, which is a good thing. 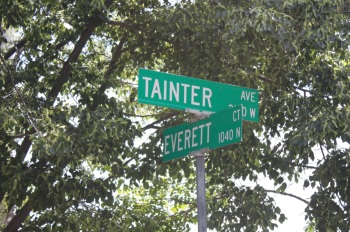 There is a large US map and a vegi and fruit medley at the western end of Tainter, which add panache to the humdrum black top.

Energy Park Drive from highway 280 to Snelling has a different vibe than the eastern segment I rode earlier in June. For example, there are several “heavy” industrial businesses, including this concrete plant.

There are light industrial buildings, which for the most part, are devoted to manufacturing as well. Then there is Midway Stadium, home (for the time being) of the Saint Paul Saints.

Midway Stadium opened in 1982 primarily for local amateur baseball teams. Since 1993, the primary tenant has been the St. Paul Saints baseball club. Hamline University plays its home baseball games at Midway, which also hosts concerts and various other baseball and football games.

The 2014 season will be the Saints’ last at Midway Stadium. As you’ve likely heard, the Saint Paul City Council approved construction of a $63 million stadium in Lowertown. Both the cost to taxpayers and the location continue to generate opposition, which I will go into when I visit the site of the new stadium. 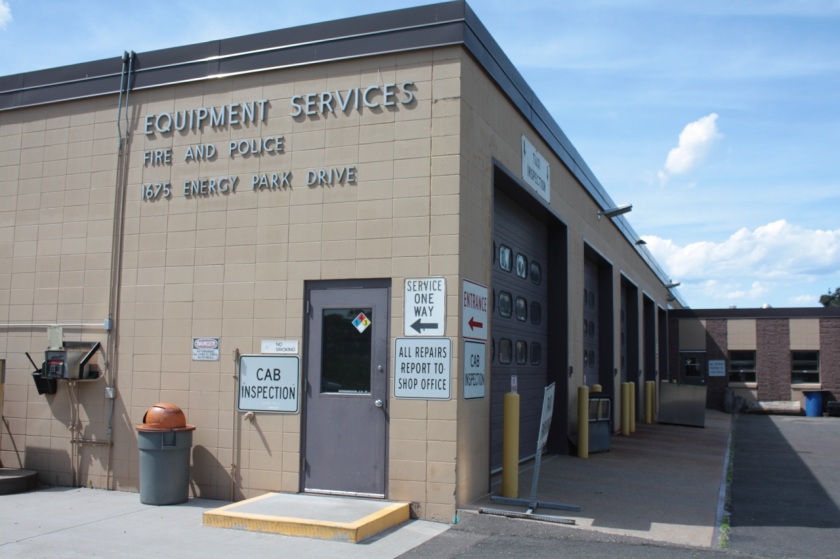 Just to the east, nearly in the shadow of Midway Stadium, is Saint Paul Police and Fire Equipment Services. Although the Equipment Services building likely is unfamiliar, you’ve likely seen this six-story structure if you’ve driven along Energy Park Drive. 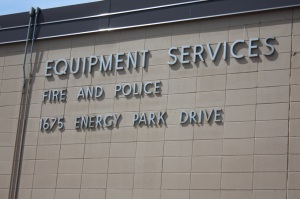 Equipment Services offers an assortment of support to the Police and Fire departments including vehicle maintenance and repair, setting up new squad cars and other emergency equipment and providing training facilities for firefighters, according to the City of Saint Paul website.

Captain Aspnes and I got together to talk SPFD training a couple of weeks after this Father’s Day session. We met for coffee at 8 a.m., just after he finished a 24 hour shift. He told me rescue crews practice extractions in part because automobile technology evolves, “Maybe there was an airbag in the steering wheel. That was it. And now they’re everywhere. Especially with hybrid vehicles, there are high voltage lines, there are fuel lines all over the place.  So we have to do a much greater amount of safing a car. We cut the battery, peel off the trim and carpeting inside the car to find airbags, gas cylinders, look for bright orange direct current cables in hybrids so we don’t cut those.”

Captain Aspnes added the increasingly technological nature of the job means more firefighters are joining the department with bachelors degrees and technical training.

Members of Rescue Squad 2 talk about their next move.

A firefighter practices cutting the hood of a car with the Excel or circular saw.

Training goes on even with high humidity and the temperature near 90.

Captain Aspnes demonstrates one way to use the Halligan Bar, invented by New York Fire Department Chief Hugh Halligan in the 1940s. Captain Aspnes said it’s his favorite tool because of its versatility.

This hydraulically powered spreader is powerful enough to lift a rail car. It’s very similar to a “Jaws of Life” which is a trademarked name.

The male dummy on the right is lead filled and weighs 200 pounds when fully intact.

The SPFD requires frequent training, more than the state mandates. According to Captain Aspnes, “It’s definitely for the people who we’re rescuing but it’s also as much for us because if I don’t do it right, I get hurt or somebody on my team gets hurt. So that has to drive a lot of our training.” Repetitive training to create muscle memory, said Captain Aspnes, is key so firefighters work at peak efficiency during emergency calls.

His favorite part of training other firefighters? “I get better at my job as a responder, again, by sheer repetition. Other firefighters will come up with solutions that I wouldn’t have thought of in a million years and I can file that away.”

All the training is reflected in the efficiency of the fire department. According to Captain Aspnes, Saint Paul firefighters exceed national standards for response time and the number of responders. Saint Paul also has one of the highest cardiac arrest survival rates in the country, which should be comforting to anyone who lives, works or visits Saint Paul.

Click on the link below to view a map of today’s ride.