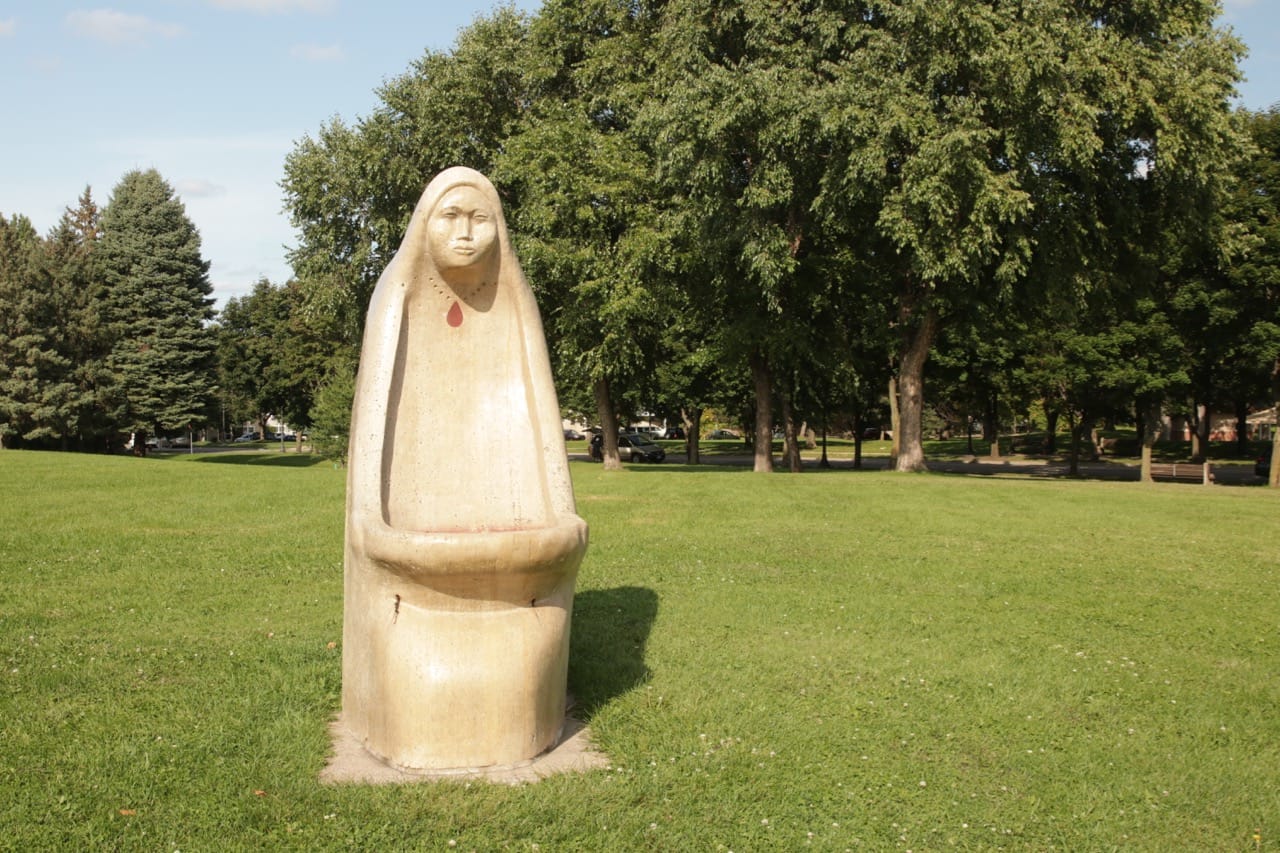 Another gray day in Saint Paul with the threat of rain hanging nearly as heavy as the leaden clouds themselves. The flat lighting and dinginess give most pictures a drab look. It doesn’t really change the sites, only the way they feel. Still, it sure beats sitting home dusting or vacuuming.

I am continually surprised by the number and variety of houses of worship in Saint Paul. Today I rode past the Evangelical Formosan Church of the Twin Cities at 1892 Iglehart Avenue. It was established to attend to the spiritual needs of Taiwanese and Chinese Christians, according to the church website.

While not religious, the Triune Masonic Temple’s architectural significance was legally recognized with its 1980 placement on the National Register of Historic Places. Henry C. Struchen, who was a member of the Triune Lodge, designed it. According to the organization’s website, http://www.saintpaullodge.org/ the Triune Lodge, 1898 Iglehart Avenue, is among the oldest, best maintained and one of the few remaining historic Masonic Temples in the Twin Cities. The organization’s website goes on to say Lodge Number Three is Minnesota’s oldest, founded in 1849, the same year Minnesota became a territory .

The danger of the high voltage passing through these substations cannot be overstated and Xcel Energy makes a serious effort to keep the curious and those bent on vandalism from getting access.

Barbed wire and what appears to be an electrified fence are a couple of the deterrents. Still, the various insulators, capacitors, switches and circuit breakers of substations make very appealing photo subjects.

Constructed in 1900, this house has some unique and eye-catching features such as the crown that extends above the roofline (first photo), the multicolored stucco, arched entryway and the bubble window.

North bound on Pascal, approaching the commotion of the Midway.

Clifford Dodd owns a small store on the second floor of 1457 University Avenue. He’s run Sweet Inspirations, a t-shirt silk screening business for four years. “(I) sell a lot of black motivational art. Historical, motivational and spiritual art. I just try to keep a positive business going so I can show the positiveness of my race.”

I met Clifford on the University Avenue sidewalk in front of the door to Sweet Inspirations. “What I do about the first of the month, I bring items out here so people know that I do still exist up here because I don’t have proper advertising on the building right now.”

The business, Clifford told me, grew out of a wagon he set up across the street from which he sold Obama for President t-shirts in 2008. Some local media featured Clifford and the shirts, which really boosted his sales. People bought thousands of shirts and he used the money he made to open his permanent store. Over the years, Clifford figures he’s employed 30 to 40 local folks, sprinkling money back into the neighborhood.

Clifford said it was very difficult to keep his business alive through the construction of the light rail. “I wasn’t able to make money here. I took my show on the road. I loaded up in a van and parked in a neighborhood off major intersections and I was able to make just enough sales to keep my business afloat.”

While not pessimistic about the future of Sweet Inspirations, he doesn’t think it will be at 1457 University Avenue. Clifford is very clear in his belief that light rail is causing a major change to the fabric of the area. “They’re going to take the small businesses away from this area. This is big money now. Big money’s going to come in and big money is going to dictate what’s going on and who’s going to be where.”

Clifford and other small retailers battle the ‘big box’ stores located across the street for sales. He says buying from him and other local businesses helps the local economy. “I tell people, you oughta stop over here and buy you a pair of socks because you go over there and spend $1,000 at Walmart, now you ain’t got no money, now you need to catch the bus home. Go ask Mr. Walmart to borrow you two dollars to get home. You know what Mr. Walmart’s going to say to you? SECURITY! But ask me to borrow you two dollars and if I got it my pocket, God is my witness, I’ll give it to you.”

Still, with all the challenges he mentioned, Clifford remains committed to Saint Paul. “There’s something very, very special about this place. There is a major migration going on for people to come right here. They’re not coming here for the weather; nobody moves here for the weather. They’re moving here because there is a heart and there’s a pulse to this city. “

While not the most architecturally stimulating Saint Paul bridge, the pedestrian/bike bridge over the BNSF railroad tracks functions well and is a welcome alternative to going all the way to Snelling or Lexington Avenues.

The street on which I emerged after crossing to the north is the unimaginatively named Energy Lane. Like much of Energy Park, the buildings on Energy Lane are mainly single story light industrial and office facilities. Energy Park was built during the energy crisis of the early 1980s. As such, the development was constructed with energy-efficient apartment buildings, industrial and retail buildings that follow strict energy-saving requirements.

In what is the best planning ever or the greatest of serendipity, Kemp’s Ice Cream corporate headquarters is right across the street!

This guard shack sits just south of the intersection of Energy Lane and Norris Circle on property identified as “1200.”

The only signage that comes remotely close to identifying the large building is the 1200 marker in the foreground. I imagine this is good fodder for conspiracy theorists. Although hard to see, there is another guard shack behind the boulder-filled island. The Google has precious little about 1200 Energy Park Drive-only that it is a US Bank Operation Center. The Saint Paul Port Authority website says the facility employs about 2,000 people. But what really goes on here?

Bandana Square is the name of the remaining handful of buildings that were once part of the expansive Northern Pacific Railway Como Shops, where locomotives and passenger cars were built and repaired.

Constructed in 1901 as the ‘new’ car shop and expanded 10 years later, this building is now primarily Aspen Medical Clinic (which will become Allina Health on August 14, 2013.) The Twin Cities Model Railroad Museum has a fantastically detailed layout in suite 222 of the building that is well worth a visit. Details at http://www.tcmrm.org/

The Atrium Office Building, above.

The Atrium Office Building and this one, where the Best Western Hotel is located, were constructed in 1885 as paint and woodworking shops respectively, according to Larry Millett’s AIA Guide to the Twin Cities.

The former blacksmith shop, now headquarters of Summit Envirosolutions and the Twin City Model Railroad Museum’s Toy Train Division, was also built in 1885. The blacksmith shop repaired and manufactured iron and steel parts that could not be purchased or repaired economically elsewhere.

The building’s most prominent features are the 18 chimneys, nine per side, which provided vents for the fabrication furnaces. All four buildings in the Bandana Square complex were built with brick from Little Falls, MN.

The are other artifacts of Bandana Square’s previous life as one of the NP’s major car shops.

To the east of Bandana Square on former Northern Pacific property are two apartment complexes and several private streets.

A signpost at the intersection of two private roads just west of Bandana Square.

One of the Burlington Apartment buildings

The Oscar Johnson Arena, tucked into the back of DeCoursey Circle, is barely noticeable from Energy Park Drive. Even if you spot the brown corrugated metal and cement block arena, you’re unlikely to give it more than a fleeting glance.

It seems too plain a tribute to the Saint Paul native who was one of the founders of the traveling ice skating spectacular known as the Ice Follies, a predecessor to Disney On Ice. Oscar Johnson and his childhood buddies Eddie and Roy Shipstad started performing publicly at Como Park in 1924. Eddie’s New York Time obituary went on to say that Oscar and Eddie had become popular enough locally by the late ’20s they were hired to perform acrobatic skating routines at hockey games in Saint Paul, Minneapolis and Duluth. That led to a five year stretch entertaining New York Rangers fans at Madison Square Garden.

Oscar Johnson and the Shipstad brothers returned to Minnesota and created Shipstads and Johnson Ice Follies in 1936. They began touring nationally with more than 20 other skaters. Oscar retired from performing in the ’50s but continued to produce the extravaganza. He died in 1970.

Merrill Corporation was founded in Saint Paul in 1968. Merrill is a financial printer and publisher and offers outsourced business communication and information management. The current Energy Park headquarters opened in 1986. The company’s website indicates Merrill employs more than 5,000 people in about 65 US and international locations.

This iconic but fading and slightly defaced sign has been on the west side of the Minnehaha Grocery at Minnehaha and Fairview for decades. Clicquot, (pronounced “KLEE-ko”)  Club was one of the largest soft-drink makers in the country in the 1920s and ‘30s. The company was based in Millis, Massachusetts until 1980 when the plant was closed.

Click on the following link for a map of this ride.