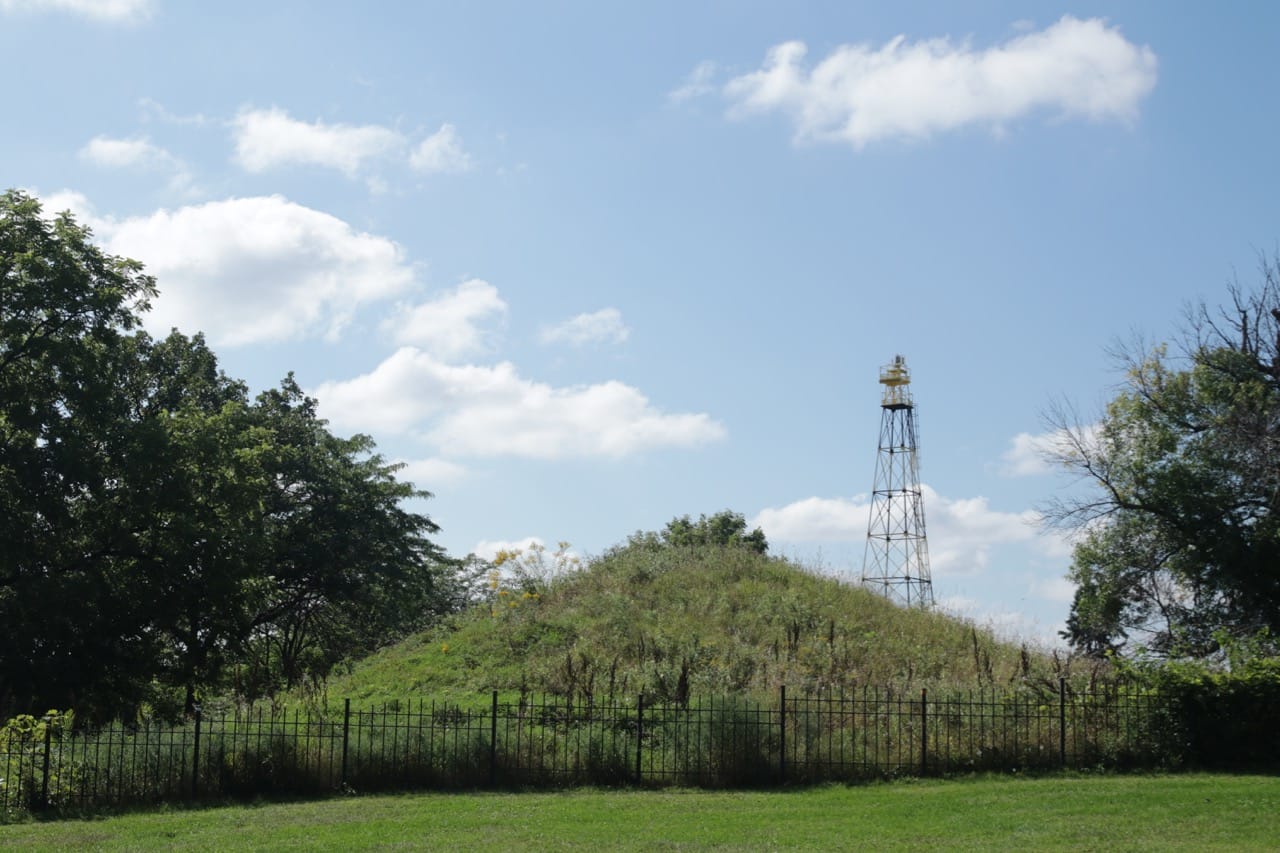 Cleveland Avenue, Highland Park. The routine look of this Tudor style building at 690 Cleveland Avenue South belies its noteworthy origin. Opened in 1940 as the Edyth Bush Little Theater, the building was a gift to Edyth from her husband Archibald Bush, a 3M executive.

For the next quarter century the playhouse, at Edyth Bush’s direction, put on new community productions as frequently as monthly. The facility was donated to Hamline University in 1964, sold to the Chimera Theater in 1975 and converted to offices in the late ‘70s. Now known as the Edyth Bush Building, it remains an office building.

At the same time as the Edyth Bush Theater was under construction, a movie house opened about a block south on Cleveland Avenue. The Moderne style Highland Theater premiered its first movie in 1939. The interior was remodeled at least once, in the ‘70s, which included the addition of a second screen. However the exterior still displays many original decorative flourishes.

OK, I left Highland Park and then I left Saint Paul for this ride. It’s the first time I’ve left the city while riding for this blog but I had to do it. Cutting through Mendota Heights is the shortest way to the southwestern corner of Cherokee Heights, which was my next stop.

My destination was Bruce Vento’s View overlook (named in honor of the late congressman and environmentalist) and Lilydale Regional Park.

The trail winds though brush on the bluff high above the Mississippi River, providing dramatic views.

From Vento’s View I retraced my steps for about a fifth of a mile but instead of returning to my bike, I hung a left on the gravel path called the Brickyard Trail that went down the bluff. Twin Cities Brick Company used the trail to haul bricks that were made here to construction sites. According to the National Park Service, the company was founded in 1894 and made bricks here until sometime in the 1970s.

Hiking down the trail I met Monica and Mark McCleary, a couple who live nearby and frequent Lilydale Park. Monica grew up in Saint Paul less than a mile from the brickyard, “We didn’t really come here,” she said, “because it was still a functioning brick yard.  But we went to Cherokee Park a lot. And when you went across the High Bridge you could see the big stacks of bricks.”

Monica and Mark are quite knowledgeable about Lilydale Park, its layout and history. They turned their excursion into a guided tour and showed me assorted Brickyard artifacts.

Mark brought up the unusual topography of the Brickyard, “You come down here in spring or late fall then you will see things like terrain that just doesn’t make sense in any other way than that a human did that with trucks but it clearly is not its natural landscape.”

Fossils are plentiful here and may legally be collected but a permit from the City of Saint Paul is required.

The Brickyard and Lilydale Regional Park remains largely undeveloped other than a few benches, garbage containers and signs, interpretive and other.Many park users, especially the Friends of Lilydale Park, stridently want to keep the park that way. However changes will very likely come to some degree beginning in the spring of 2013. The City of Saint Paul has applied for a permit to improve about 1.7 miles of the road through the north side of the park and longer-term plans call for bathrooms, shelters and other enhancements. Here are some links to learn more.

This was my first trip to Vento’s View and the Brickyard portion of Lilydale Regional Park and I found both were remarkable. From any perspective-historical, archeological or recreational, there are a vast number of things to see and do.

After more than 90 minutes in Lilydale Park, I hiked back up the Brickyard Trail, got on my bike and rode a couple of blocks to neighboring Cherokee Park. Not surprisingly, there was a lot of activity on this gorgeous summer afternoon.

Not far away, Tom McGregor was enthusiastically painting when I rode up and began talking with him. He continued painting as he explained, “This is called en plein air painting which means basically that you’re painting outside trying to capture a moment in time. You’ve got a couple of hours max to get your key notes down. This could be something that I finish up in the studio or leave rough like this or I do a large painting from.”

Tom said he won’t know for a while which of the three ways he’ll go with this painting, “I’m standing here painting this fast and furious trying to capture the effect and I don’t know how I feel about it yet. So I have to actually take another look at it after I’ve taken a little break.”

Tom lives on the West Side and takes advantage of the area’s magnificence, “I can stay on the West Side and go for several years without repeating myself.  You don’t have to go very far to find a painting. You just have to tune into what it is that you love. I come over here and I see the light coming through those trees. A dap of light just does something. I just know it’s something I want to try to capture. You have to really love it.  You can’t paint something you don’t really love.”

Perhaps surprisingly, summer is Tom’s least favorite season during which to paint because there is so much green, “I love winter, despite the cold. The sun is at a low angle. Artists like a low angle because the sun going through all that atmosphere you get beautiful golden colors. When that hits snow you get the pinks, you get the turquoise, the purples, you get all of these colors in the snow.”

I was intrigued by Tom’s multilevel easel, which he said he customized for the way he paints.

Tom majored in art with a concentration in graphic design. He worked full-time as a graphic artist but for the last few years he’s done much more painting.  Now, he says, it pays half his bills.

Tom has a website http://mcgregorart.com/ and a blog http://mcgregorpaintings.blogspot.com/ , both of which display many of his paintings and his musings.

The ride home from Cherokee park began with a trek east to Ohio Street, a wonderfully curvy road that is a fun alternate to the High Bridge to and from the West Side. At Plato Boulevard I went west through Harriet Island Regional Park and onto Water Street and the north entrance of Lilydale Park.

If my experience is at all common, this is the side of Lilydale Park that is most familiar.

Water Street imperceptibly turned into Lilydale Road meaning I had left Saint Paul again but in fewer than two miles, I’d be back in the city.

Some takeaways from today’s ride:

The map of today’s ride: